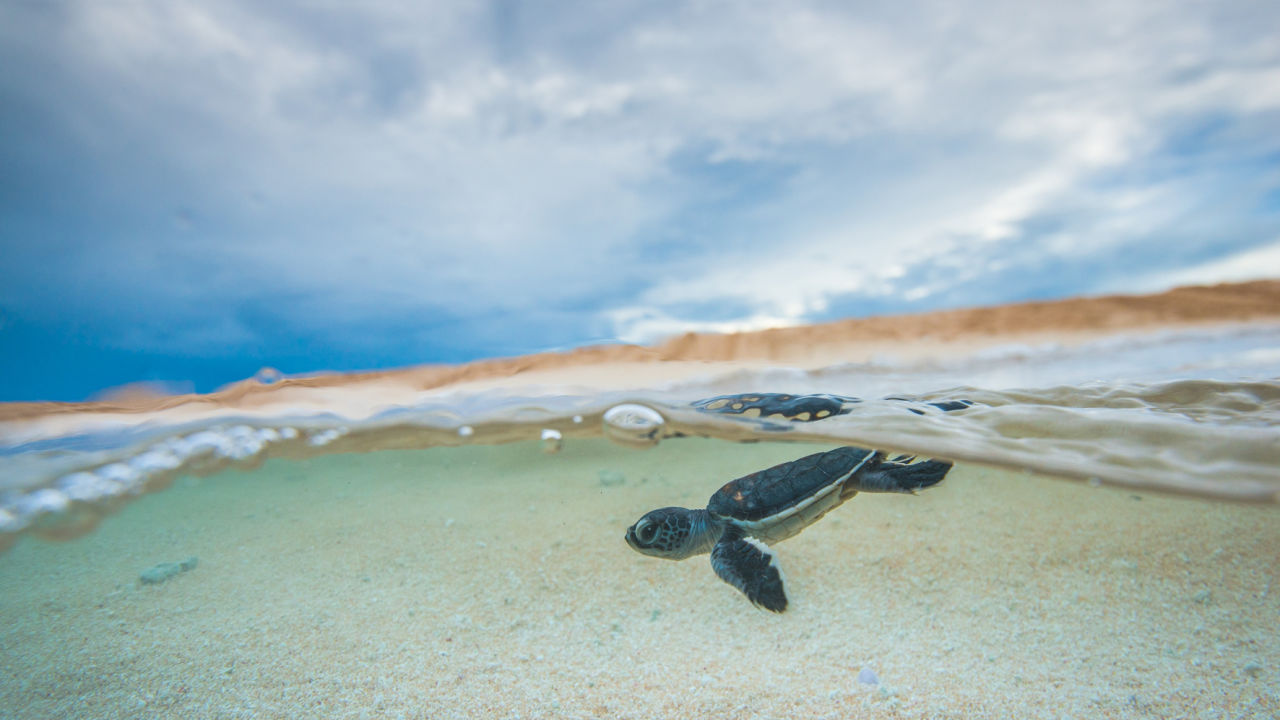 “On the remote northern edge of the Great Barrier Reef, lies a marine paradise that plays host to one of the most spectacular ocean migrations on the planet. This is Raine Island”

We’ve recorded more than 64,000 green turtles here in one nesting season alone, with as many as 20,000 at once inching their way onto Raine Island’s deserted beaches to nest having travelled thousands of kilometres to the same place they themselves hatched decades prior.

Despite these ancient creatures existing since the time of the dinosaurs, right now the green turtle is endangered globally.

For over 30 years, scientists watched the decline of the northern Great Barrier Reef’s green turtle population. Nests were flooded, with eggs drowning and fewer hatchlings emerging from those nests that survived the tides. Turtles returned to the sea exhausted, unable to find a safe nesting place. Thousands perished – falling victim to treacherous cliff falls, getting trapped in rocks or expiring from sheer heat exhaustion on the sand.

Without help, the outlook was bleak.

And not just for the turtles.

Raine Island is also home to the most important seabird nursery in the Great Barrier Reef World Heritage area. It’s one of only two Reef islands where the endangered and rarely-sighted Red-tailed tropicbird nests.

Many other Reef animals also rely on this tiny remote island. A decline in any one species can have a devastating effect on this delicate ecosystem.

Through our world-leading Raine Island Recovery Project, we’re bringing together Traditional Owners, science, government and business – a unique collaboration to ensure a future for the Reef’s green turtles.

tracking turtles thousands of kilometres to learn more about how to help them · applying 60,000 years of Traditional Knowledge.

protecting and restoring a vital ecosystem.

cubic metres of sand moved to raise the nesting beaches

cubic metres of beach has been reprofiled

the amount of nesting areas above tidal inundation

of heat exhausted and rock-trapped adult turtles rescued and returned to the sea.

is the longest distance tracked.

640,000 additional green turtle hatchlings have already begun life on the Great Barrier Reef because of the Raine Island Recovery Project.

The project’s sustainable benefits will continue to grow every season.

Over the next decade, millions more hatchlings will emerge due to the beach reprofiling and from saving adult females who will return again and again to produce more offspring.

Future generations of mature females will be saved by the protective fencing.

As well as saving turtles, the fencing is protecting seabirds and their nests and chicks from being disturbed by the turtles. Traditional Owners are playing in important role in caring for Raine Island and its animals, which provides enduring benefits for those communities.

And we’re not done yet. Together, we’re making a real impact but there’s much more to be done

So. Many. Turtles. We counted more than 64,000 green turtles this season! This #WorldTurtleDay we’re celebrating the biggest nesting season on #RaineIsland since starting our project to restore this incredible island – the world’s largest green turtle nesting area. On one night alone, our #RaineIslandRecoveryProject team counted 11,969 turtles on the beach attempting to nest. No #socialdistancing for these ladies! #greatbarrierreef #thisisqueensland #lovethereef Partners: BHP Qld and NSW, Department of Environment and Science, @gbrmarinepark #TraditionalOwners Wuthathi and Meriam Nation (Ugar, Mer, Erub)

A post shared by Great Barrier Reef Foundation (@greatbarrierreeffoundation) on May 25, 2020 at 1:01pm PDT

Raine Island is a place of special cultural significance to two groups of Australia’s Traditional Owners.

Cape York’s Wuthathi Nation and the Torres Strait’s Meriam Nation (Ugar, Mer, Erub) have deep cultural connections to the island and its marine life dating back 60,000 years. Traditional Owners have been involved in every research trip to Raine Island, sharing Traditional Knowledge and taking part in the on-ground work to help preserve the island and the turtles that nest there for future generations. Traditional Owners Peter Wallis and Jimmy Passi have travelled to Raine Island many times with the project. Find out what it means to them.

Partnering with Reef communities to respond to climate change and local threats.

Sign up to stay up to date with our latest turtle news plus highlights from the more than 60 Reef-saving projects we’re working on right now.

Sign up for the latest from the Great Barrier Reef.

Endangered green turtles nesting in their thousands on Raine Island

The turtles of Raine Island

Where is Raine Island?

The Foundation played a leading role to initiate the Raine Island Recovery project. This five year, $7.95M collaboration between BHP, the Queensland Government, the Great Barrier Reef Marine Park Authority, the Wuthathi Nation and Meriam Nation (Ugar, Mer, Erub) Traditional Owners with the Foundation is protecting and restoring the island’s critical habitat to ensure the future of key marine species including green turtles (nam - the common language word for turtle), seabirds and other marine species.